Those of us in the MW Gangster's Game syndicate did not dare to speak of the Kentucky 5* this spring until Frank actually arrived at the Kentucky Horse Park. It's pretty surreal. We all joined the syndicate when Frank was 6 or 7,  just starting prelim. There were no guarantees he would become a 5* horse and amazingly here we are. It's the week after Kentucky and I can barely believe it actually happened - and to think there will likely be more 5-star events in Frank's future!

Frank didn't have a particularly great run up to Kentucky. He did win his last 4* short at Fair Hill two weeks before Kentucky but he hadn't completed a 4* long since Bromont in June 2019.  Last fall and the year of COVID were challenging...Frank had some really good runs but fell at the last fence at the Plantation 4* and he retired on xc at Tryon's 4* long.

I've never experienced a 5* behind the scenes and it was amazing. The whole experience was why I joined a syndicate and it did not disappoint! Each owner got a badge (with our picture!) which allowed us onto the property and into the barns. They held a xc course walk for owners which was led by Team Coach Erik Duvander. There were various owner events and lots of complimentary drinks throughout the weekend! But best of all, we all got to participate in a 5* event without actually having to ride in it!!! During dressage and show jumping, we were ringside on the podium reserved for the horse's support crew. A.M.A.Z.I.N.G. During cross country we were in the media tent where you get to watch all the camera footage simultaneously - so we saw Frank's complete xc round not just what was shown on the live stream. Also A.M.A.Z.I.N.G. Oh yea, I was also in the vet box when Classic Moet was getting cooled out. Eventing royalty was everywhere.

Frank and Dan, despite some serious spookiness in dressage warm-up, threw down an amazing dressage test, scoring a 29.6. That was insanely exciting. We were all watching Dan and Frank leave the ring and Erik Duvander was the one who pointed us to the score board. After dressage, Frank was in 17th place.

But everyone was worried about the xc course. The course walk with Erik Duvander didn't elevate any fears - in fact, it made me more nervous. The jumps were maxed out, the combinations were incredibly technical and demanding, and the combinations just kept coming...all the way to the third from last fence. 50 jumping efforts in total over 11 minutes. I didn't ask Dan anything about it, but he told his wife, Kaitlin, that he was terrified and in utter agony. Word on the street was that everyone was intimidated by the xc course, even the seasoned 5* riders. Kentucky has had a reputation of being a soft 5* but that was not the case this year. Watching the weekend unfold, I could really appreciate what a mental game it becomes. Each rider struggle to manage his/her own nerves and performance anxiety, and build a belief in themselves that what seems impossible is actually possible.

When Dan left the start box, we ran to the media tent. My heart was pounding the whole time, and we hollered and cheered every time he made it through a combination. The 12 minutes they were on course went by shockingly fast. When he made it through the final combination at 26, we ran to meet him at the finish. Frank recovered quickly and well. They had a lot of time penalties, but we were just so excited that they jumped around clear. Excited doesn't even describe it. It was simultaneously the biggest high and the biggest relief.

Frank got his normal long format treatment - ice boots, IV fluids, lasers on his legs, and his Back on Track blanket. By dinner time he was feeling super perky and being a little social butterfly at the barn. The rain started in full after Frank and Dan finished xc and we hung out in the barn for the rest of the day watching xc on the live stream.

Kentucky is weird with no spectators! No spectators meant no shopping and very limited food options, so it felt like a normal horse trial in a lot of ways only with Tim and Jonelle Price, Willian Fox-Pitt, and Oliver Townend walking around :)

Show jumping was a bit of a disappointment. Frank found the ring almost incomprehensibly spooky - even without spectators. Frank had to jump the first fence right towards the in-gate where we were standing and I honestly didn't know if Dan would be able to get him over the first fence let along around the course. Amazingly, Dan did get Frank around the course, but Frank was super backed off and unfocused. He had 5 rails down which means, despite completing a 5*, it's not an MER. Frank is an incredibly spooky horse and that ring was the different than anything he's seen to-date. To top of it off, Frank hasn't had to show jump AFTER cross country since Bromont 2019, so I also imagine the last day of Kentucky blew his mind.

The exciting fact is that Frank has all the pieces to be a consistent 5* horse and is only 11 years old! I can't say enough about Dan and how impressed I am with him and his ability to pull himself through the emotional roller coaster of the weekend. Frank is not an easy ride and Dan really delivered a stellar performance and I truly believe the odds are in our favor for Frank to have a long and successful international career. 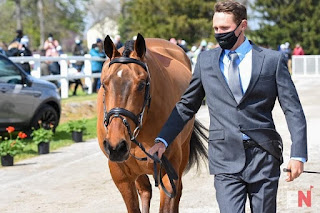 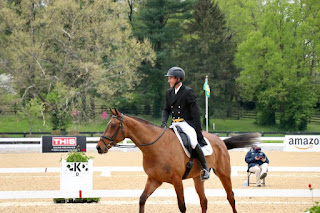 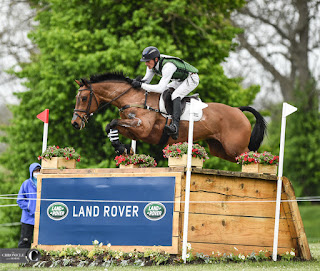 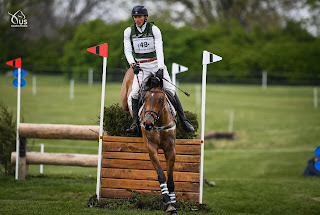 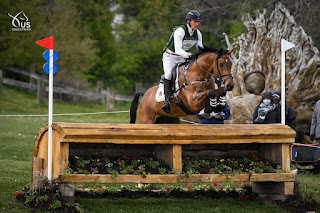 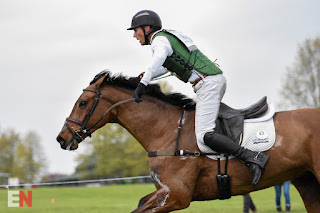 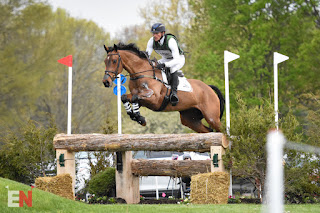 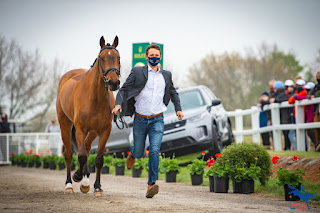 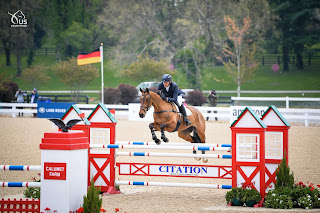 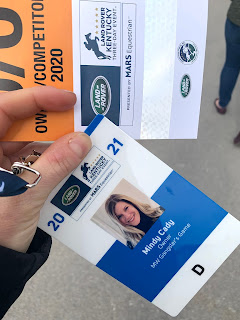 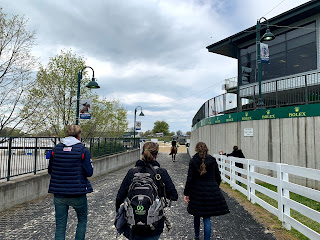 Heading into the arena for dressage 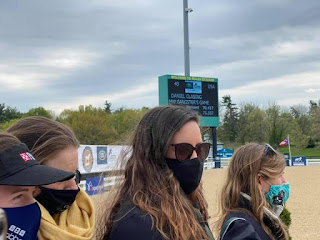 Ringside at the start of Frank's dressage 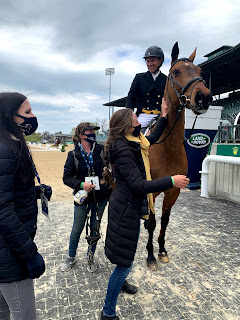 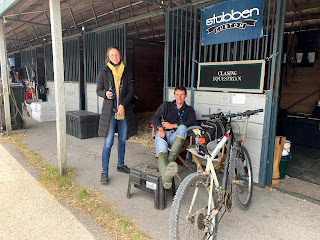 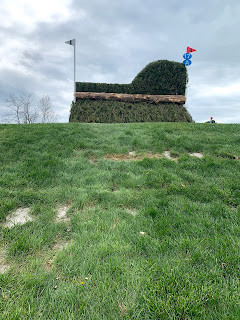 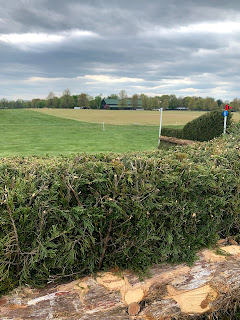 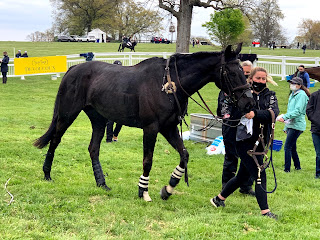 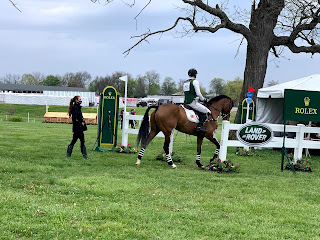 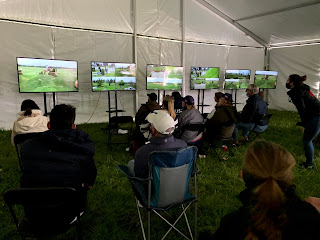 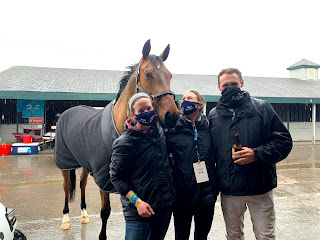 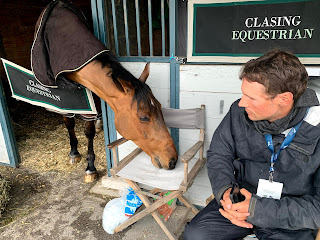 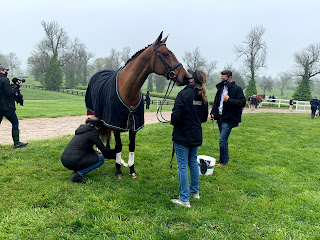 Frank loving on his groom, Katie 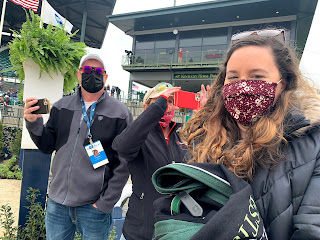 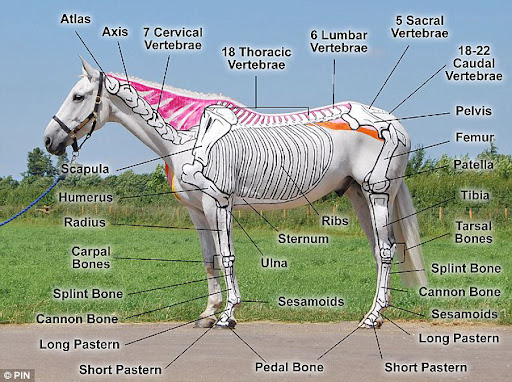