It's been a while since I've logged into the blog and written down what's been happening with the horses!  I don't know why I didn't blog in 2019, other than the fact that a lot was happening and the blog just fell through the gaps. Here's a quick catchup.

Last time I wrote I had just purchased a 6 yr old thoroughbred, Turtle. Turtle took to eventing very quickly. He spent the first couple of months of 2019 in Aiken and did a couple of jumper shows. When he came back north, Dan and Kaitlin competed him in 2 recognized novice horse trials, finishing 3rd and 5th in large, competitive open divisions. It was really exciting to see how this horse developed in such a short period of time. 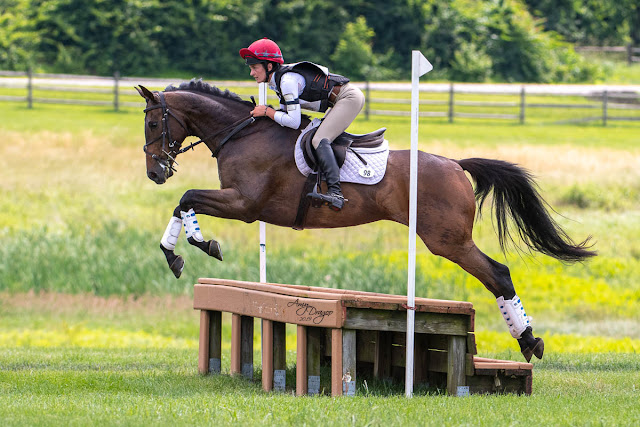 From 2016-2019, my partner and I had been traveling back and forth between Philadelphia and Atlanta once or twice a month. While it was fun and I was quite fond of the airport, it was also expensive and tiring. We started talking more seriously about my relocation to Atlanta. The only thing that was holding me back was having my horses with Dan and Kaitlin and being part of their program & Frank's syndicate. Atlanta would be a big change in the horse area, but I talked to my boss and it turns out work wanted me to relocate to Atlanta.

So I made the decision to do it and decided to sell Turtle in the process.  I never quite clicked with him and didn't feel like competing, so it made sense to simplify the horse situation prior to my move. Turtle sold very quickly - within 2 weeks of putting him on the market.

Shortly after, Tony and I found the perfect house in Atlanta and I put my PA house on the market. Then Kaitlin and Dan announced that they were building a farm in Virginia and leaving PA. It was all meant to be. I would have had to make a huge horse change anyways had I stayed in Pennsylvania.

Before I moved, I took Leo out for a spin around the novice circuit. It was super fun! We competed at Seneca and Flora Lea. The results were nothing spectacular but he was happy and even relaxed in the dressage ring. It was a nice finale to my time in Area II.

I officially moved to Atlanta in Nov 2019. I left Leo with Dan and Kaitlin and they later brought him down to Aiken for me. I didn't have a barn selected for him in the Atlanta area but I had a short list of options. There really weren't that many eventing options close to the city. Elise Wallace is 1.5 hours to the north; Kristin Schmolze is 2 hrs to the east in Athens; Julie Richards was an 1 hour south, but none of those places made sense for a retired eventer whose mom wasn't really sure what she even wanted to do next.

I went to visit an eventing facility about 40 minutes east of my new house, Montclair Stables and trainer Nicky Buckingham. The facility was great and Nicky seemed awesome so Leo moved in. Nicky's competed through the 2*, now 3* level and has had a number of horses at the intermediate level. She has a strong dressage focus and is super knowledgeable. She has a group of adult amateurs that board at the barn and event - which is amazing! At Dan and Kaitlin's I was pretty much a lone wolf besides the working students. Montclair really is the perfect situation for me. It's a way to meet people in a new city and get good instruction. 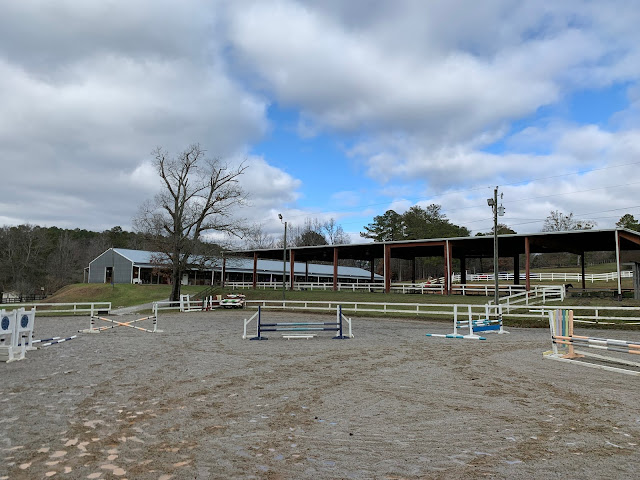 I started taking a lot of dressage lessons with Nicky. Leo definitely wasn't a super fan but he was willing and I was able to just focus on my own improvements, without caring so much about what Leo was doing since we weren't competing. Nicky really honed in on my position - centering my shoulders, getting my weight evenly distributed, getting my shoulders back!

Nicky rode Leo for me during the initial lockdown. We weren't prohibited from going to the barn, but Tony and I were really serious about minimizing our contact with people at the onset of the pandemic.  After 6 weeks, I started going back to the barn and riding Leo. But the reality was, I was bored. Leo has always been a difficult ride, and he hasn't gotten easier as he has gotten older. He still is very resistant to the bit on the flat, and continues to be hot and erratic jumping. He's not the funnest ride anymore and the one negative about Montclair is that it is a land locked property with no trails. There is one large pasture with xc jumps that I can do trot sets in, but at this point in Leo's life he doesn't need to be drilled in the ring or worry about trot sets for fitness.

So I got to thinking about buying another horse again and started horse shopping.

When states started going back to normal, despite the pandemic, I started horse shopping. I drove to Lexington, KY to sit on 2 horses. One 6 yr old and one 4 yr old - both thoroughbreds. They were nice but not for me.

Then I visited eventers Hillary Irwin and Conor Rollins in Ocala, Florida. They had 3 youngsters available: two 4 yr thoroughbreds, and a 7 yr old thoroughbred. I was very interested in 2 of them. One of the 4 yr olds and the 7 yr old. My interest in the 7 yr was a surprise because he was huge! 16.3 hands (possibly larger) and just big - not a thin or light weight thoroughbred. The 4 yr old I like was also big 16.2 but was more short coupled and felt like a sporty ride. They were both super fun to ride.

The big difference between then was their xc experience. One had been schooling and one hadn't. The one who had xc experience and was cheaper, was the 7 yr old. Johnny. So I vetted and purchased Johnny!

Getting to know Johnny

Johnny is very different than any other horse I have had. He's super chill and lazy. When I rode him in Ocala, we were in a big open field. He was plenty forward. When I got him to Montclair and rode him in the covered dressage ring for the first time (sans whip and spurs), I could barely get him to trot. Definitely an amateur friendly horse. It took a lot of getting used to - I actually had no idea how to ride this type of horse. We do a ton of transitions trying to get him sharper to my leg and there has been a lot of improvement.

Nicky also reminds me that he was being ridden by a professional guy rider before me and its natural for a horse to need some recalibration for an amateur, female rider.  Patience, Mindy.

Boy is this horse big too. But the best thing about him, is his brain. If he gets to an odd distance or has an awkward jump, he doesn't care. If he hits a jump, he picks up his feet at the next jump. Horses galloping around the xc course he's schooling on...no problem. When he has to move away from the group, he obeys. Fillers in the ring - doesn't phase him. Banks, ditches, water - no big deal. Trailering fine, farrier totally cool, mane pulled and face clipped - he's all good. So in light of all that, the fact that he's lazy off the leg isn't so bad. As Kaitlin says, that can be trained out of him. He's also steady in the bridle and accepting of the bit - very unlike Leo.

Besides his response to my leg, I spend a lot of time working on my ability to control his shoulders. Square circles is our thing. I also work on counter bending and stretching - both difficult for him. He sometimes struggles picking up his right lead but that has been getting better. Canter departs are soon to be another focus area since we always lose the connection there but we're still at some pretty basic stuff with energizing his step and getting him responsive to the leg. There has been a lot of improvement though in just 2 months which really shows how trainable he is.

On August 15th, I took Johnny to his first horse trial! I had taken him xc schooling twice before. The first time out he bulked at some of the proper beginner novice jumps so the second time we kept things smaller to keep his confidence high. We did a 2 -2'3" ft division at the schooling show. I just wanted to see how he responded to everything and give him a confident and fun experience. He was really fantastic. He was totally fine in the dressage ring - just did a few nickers trying to find his friends. Show jumping was fine. (We got a lot of awkward distances / jumps but he didn't care). And on xc he was really fantastic! It was hard getting him going out of the box but once he was cantering fences, he really got into it and started looking for the next fence! It was a really exciting feeling. He jumped the bank, got into the water (though at a walk) and was rideable throughout the course. Good boy Johnny!

He ended up winning his division - so cute! 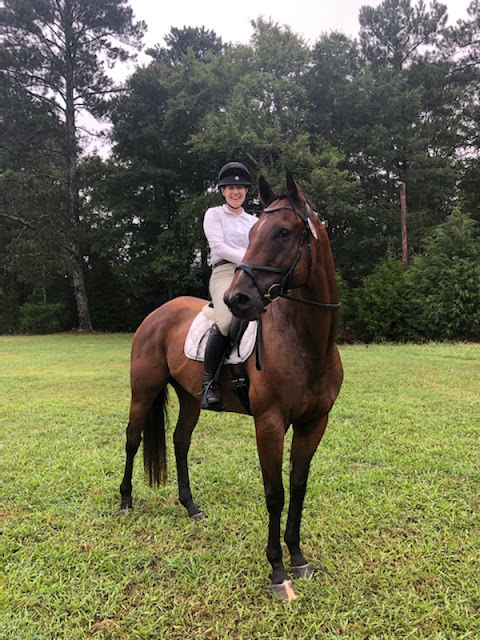 Next up Johnny will do his first recognized horse trial at Beginner Novice in October at Poplar Place. It will be fun getting to know new competition venues and being a part of the Montclair crew is already a surprise bonus! Moving to Atlanta brought so many good things into my life. I'm glad it all came together like it did.